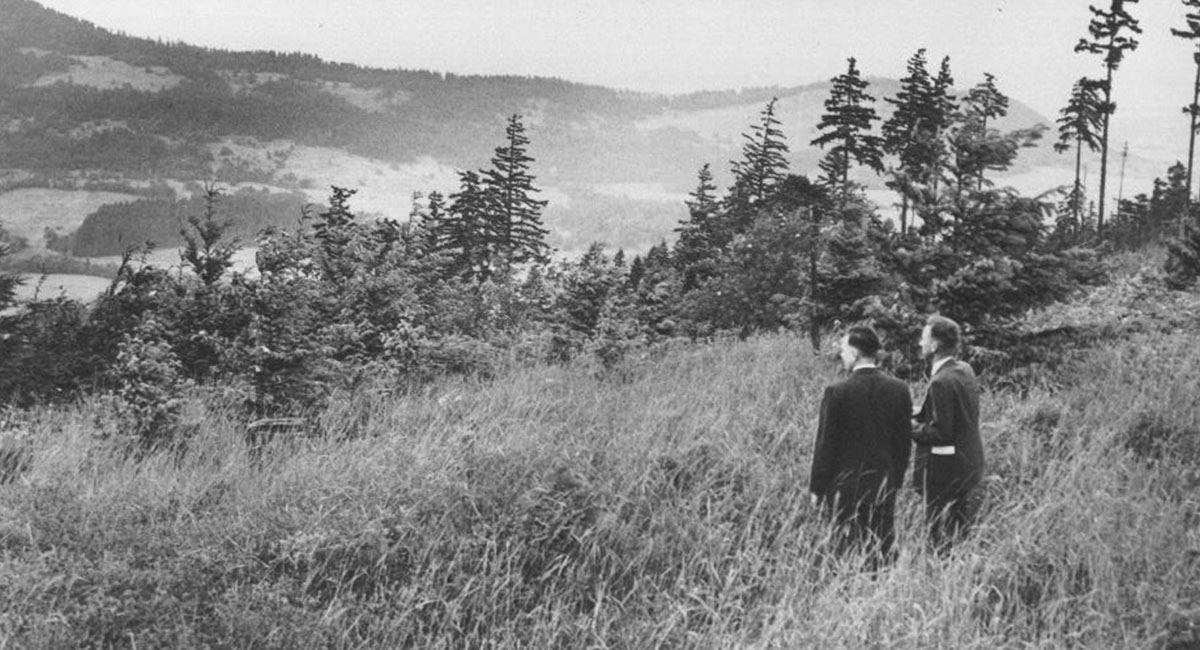 Acquisition History of the McDonald and Dunn Forests

The McDonald and Dunn Forests, located just north of Corvallis, are the core of OSU's network of research, teaching, and outreach forests. The McDonald portion was purchased, starting in the late 1920's, using money contributed by a friend of the University, Mary McDonald. The Dunn Forest, added later, was part of Camp Adair during WWII. After the war, it was declared surplus by the Department of Defense. Bullets can occasionally still be found in some of the older, low elevation trees.

The McDonald and Dunn Forests were first home to the Kalapuya people for thousands of years. The indigenous people burned the landscape for ease of movement and to improve habitat for various plants and animals that helped sustain their way of life. In those days, the hill slopes were grassy with a few scattered oaks and oak savanna, with conifer trees in the wetter, more fire-resistant draws. Smallpox and other diseases reduced the Kalapuya population to only a few dozen by the 1830's, and the remaining people were forcibly removed to what are now the Grand Ronde and Siletz reservations after the Treaty of Dayton in 1855.  Kalapuya people are now members of the Confederated Tribes of the Grand Ronde Community of Oregon and the Confederated Tribes of Siletz Indians.

Early Euro-American settlers grazed the area extensively and suppressed fire. One important result was that Douglas-fir invaded and began to transform the open savanna into a forest. Conditions were good for tree growth – consequently timber harvesting started during the late 1800's. At one time, fifteen sawmills were located within the areas that are now the McDonald and Dunn Forests. Except for patches of older trees, which were not harvested by the early settlers, the forest has been almost completely "cut over" at least once.

Dean George Peavy and T.J. Starker were the driving force behind the acquisition of the lands that became McDonald Forest, with Peavy managing the donations and Starker locating and purchasing parcels. The first piece was purchased in 1926 with contributions from individuals and the Oregon Agricultural College. The benefactor in their mission was Mary McDonald. Mrs. McDonald was a very wealthy businesswoman whose late husband had built up large holdings of timberland in Northern California and Southern Oregon. In 1927 she began donating land in southern Oregon (which the School subsequently sold), and giving money to finance the acquisition of McDonald Forest lands. She had a specific goal for the donations she made to the School of Forestry: she had no children of her own and wanted to help the youth of the future learn more about the resources she was most interested in and concerned about, Agriculture and Forestry. Mary McDonald died in 1935, by which time 3000 acres had been acquired for McDonald Forest. In her will she left all of her real property in Oregon to Oregon Agricultural College and specifically stated in the will that proceeds from this property would go towards "agricultural research work." George Peavy clarified her intent, explaining that at the University of California (where she bequeathed the major portion of her estate), forestry is part of the School of Agriculture. Mrs. McDonald’s personal secretary also said that the intent was that the bequest would benefit the School of Forestry.

In 1947, Dean Paul Dunn worked very hard, in spite of opposition from the School and the College, to acquire an additional 6,200 acres of forest and agricultural land that had been used for training by Camp Adair during World War II. The government had originally acquired this parcel from nearly 40 different landowners through purchase and condemnation proceedings. Although the land was valued at $250,000, President Strand was somewhat opposed to the acquisition because of the $2000 that would have to be spent to survey it. Dunn prevailed and the transfer came through the War Assets Administration with a use mandate stated in the deed: