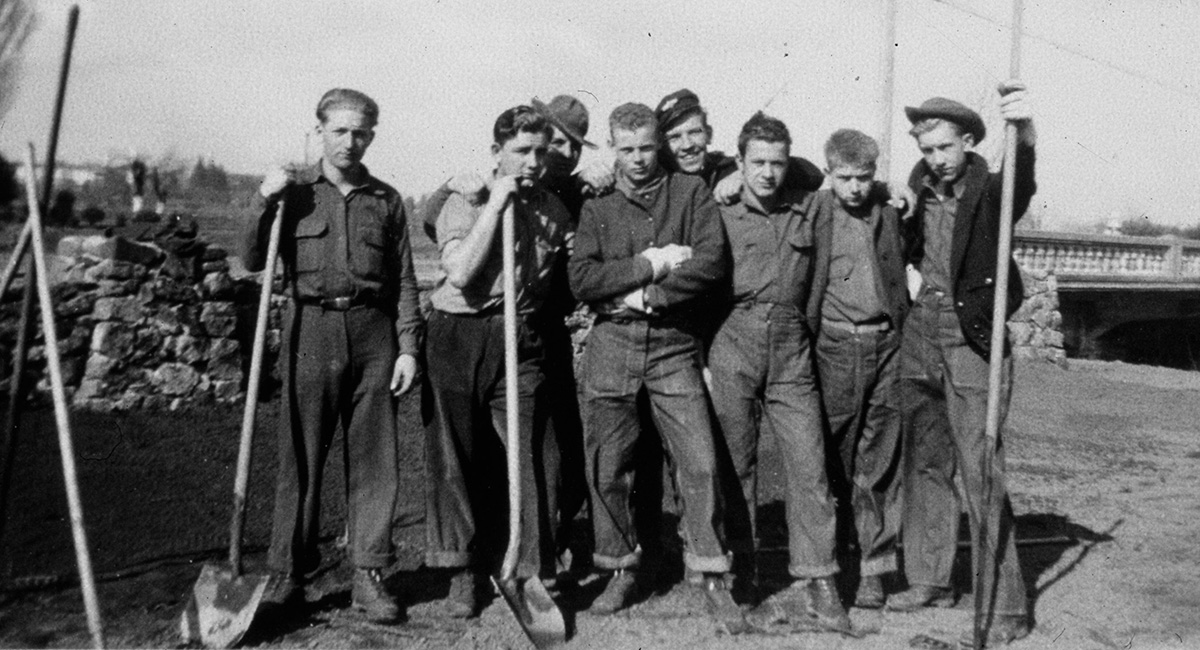 The late-prehistoric inhabitants of the Peavy Arboretum area were members of the Lukiamute band of the Kalapuya. Kalapuya is the name given to native people of the Willamette Valley who spoke Kalapuyan languages (a Penutian phylum). Kalapuya descendents currently form a living culture that is centered at the Grand Ronde and Siletz Reservations. Prior to Euro-American domination of the Willamette Valley environment, the Kalapuyans were comprised of 10 to 13 bands that spoke dialectically distinct languages and occupied territories roughly oriented along drainage basins. The name Lukiamute is derived from a native word for the people who lived along the Lakmayut (Lukiamute) River and spoke a common dialect (Mackey 1974:33-34). Numerous lithic scatters and features located in Peavy Arboretum and its surroundings are evidence that the Kalapuya once inhabited these landscapes.

Kalapuyan inhabitants regularly set fire to the landscape to enhance ecological productivity of desired plant and animal species. Tree-ring studies conducted on stumps in McDonald Forests show a pattern of regular burning (occurring yearly at regular times in particular environments) that was interrupted in the late 1840s (Sprague and Hansen 1946). The 1840s date corresponds with the arrival and settlement of significant numbers of Euro-American settlers in the Willamette Valley, which introduced exogenous diseases and reduced the native populations from the thousands to only a few hundred.  The remaining people were forcibly removed to what are now the Grand Ronde and Siletz reservations after the Treaty of Dayton in 1855.  Kalapuya people are now members of the Confederated Tribes of the Grand Ronde Community of Oregon and the Confederated Tribes of Siletz Indians.

The Arboretum became the essential connection between the forest, the students, and the faculty for the College of Forestry’s educational and social activities. In 1933, a Civilian Conservation Corps (CCC) camp was established at the Arboretum. Civilian carpenters with the help of the first set of enrollees at the camp, built the camp’s permanent operational, administrative, storage, and residential buildings. These buildings provided a self-sufficient living and working environment for the enrollees. Three of these building remain within the Arboretum today. Three other CCC buildings adjacent to the Arboretum have maintained their original use as a warehouse, a machine shop, and an office for the OSU Research Forests. The CCC's key role in western Oregon was fire prevention work and reforestation. The CCC contribution to McDonald Forest and the Arboretum significantly affected the landscape of the present forest. They expanded the nursery, and constructed Cronemiller Lake to provide water for irrigation. The crews built roads, planted trees, constructed firebreaks, strung telephone lines and built trails, including the Section 36 Trail, which is still enjoyed by recreationists today.

After the CCC Camp Arboretums’ disbandment in 1942, the complex was operated by the Oregon Department of Forestry for their offices, nursery, and fire training programs. By 1964, the Oregon Department of Forestry moved their offices to Elkton. Currently, Oregon State University, the College of Forestry, and the Research Forests operates and maintains the Arboretum. The planting history of the Arboretum began in 1926. From 1926-1936, the College of Forestry planted the first set of tree and shrub species within the Arboretum. From 1936-1942, Arboretum planting was a cooperative effort between the students, the CCC, and the State Nursery. By 1964, 31 native species existed and 73 woody species had been planting within the Arboretum

"An Arboretum for the School of Forestry - an outdoor laboratory in which experiments with various tree species and silvicultural practices could be conducted and a "botanical garden" of trees - has been long dreamed of and planned for by the faculty and students of the school. Definite action toward the realization of this dream is one of the most noteworthy of the achievements of the year." (The Forest Club, 1924)

The Oregon Forest Nursery in the Arboretum, established in 1925, was in the hands of Vernon McDaniel throughout the entire period of operation until it was discontinued in 1963. By 1930, the Nursery was shipping more than 200,000 trees to farmers in the state; the major species distributed in that year were Black locust (50, 800), green ash (16,000), Russian mulberry (9,200), Chinese elm (33,200), western yellow pine (36,000, Scotch pine (8,000) and lesser quantities of western red cedar, Maritime pine, box elder, redwood, Norway spruce, and Austrian pine. By 1936, the demand for trees and the general success of the Oregon Forest Nursery made necessary an expansion program that included an additional ten-acre tract, a storage reservoir to provide water for irrigation (Cronemiller Lake), a new residence, garage, crew house, and cold storage and packing house, many of which still exist in the Arboretum today. By 1941, an option had been taken on an additional 44 acres of land lying immediately adjacent to the Nursery. In the same year, the State undertook the first large scale planting on state forests—approximately 250,000 seedlings were sent out to various Forests across the state. The Nursery continued to expand during the 1940s. Plans were made for the development of an additional 15 acres to be devoted to seed production, an improved system of overhead irrigation was added, and the mechanization of planting and weeding was implemented. By 1957, the State Department of Forestry could report that production at the Oregon Forest Nursery reached 12,500,000 during the previous two years. The Oregon Forest Nursery had come a long way from its origins, and the role of the CCC in carrying out this program was a key one. The Nursery was discontinued in 1963, its role being taken over by the State nursery at Elkton, Oregon (Jackson 1982).

Mackey, Harold 1974 The Kalapuyans: A Sourcebook on the Indians of the Willamette Valley Oregon. Mission Mill Museum Association, Salem, Oregon.